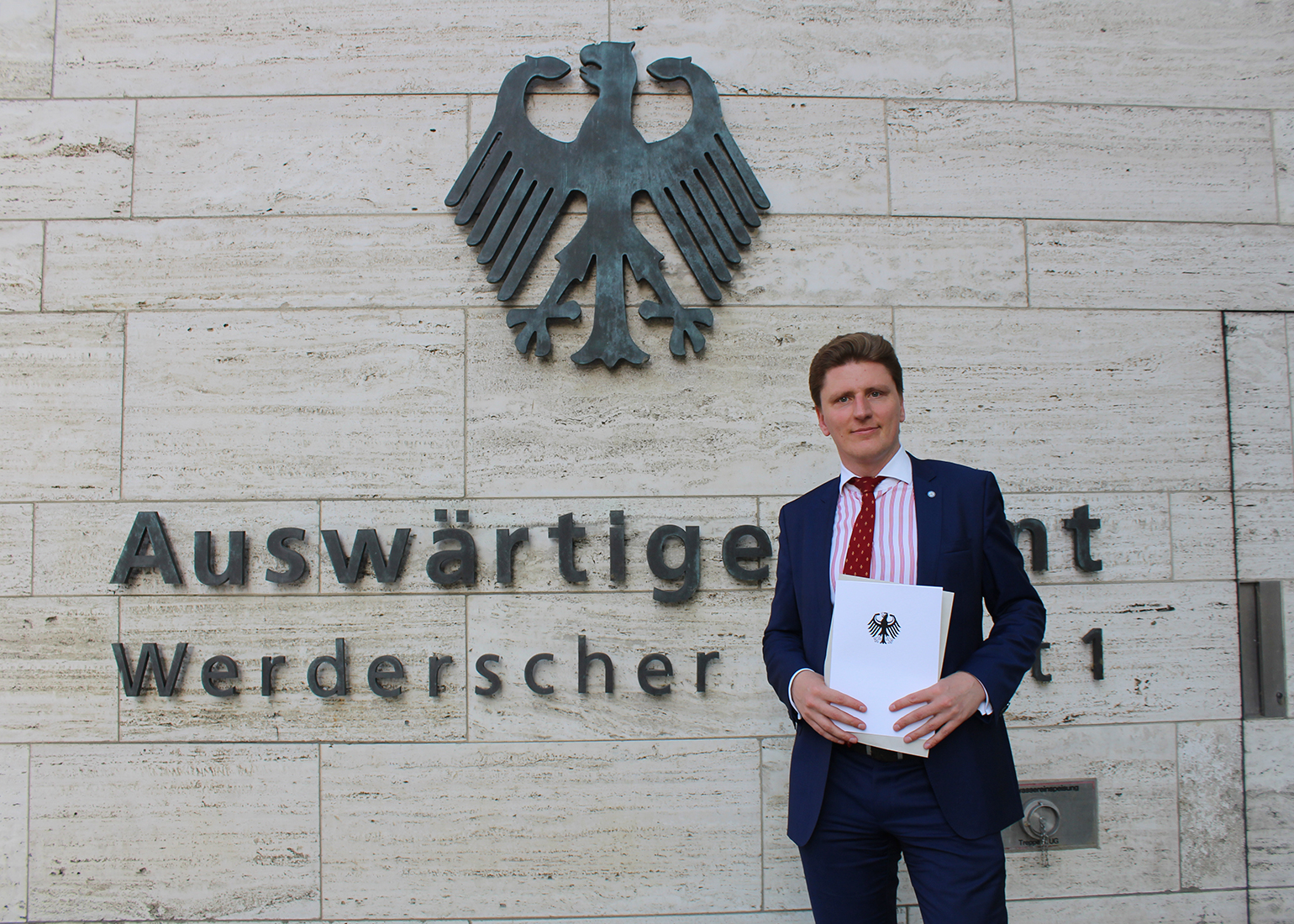 From 2 to 6 September 2019 the 12th Network Consolidation Program was held at the German Ministry of Foreign Affairs in Berlin on the topic "Peace Mediation & Crisis Diplomacy in Action. Managing Difficult Decisions and Dilemmas in Societal Transitions".
At the beginning of the seminar Stefan Biedermann - Head of Training for International Diplomats, German Federal Foreign Office, addressed the participants with a welcoming speech.
Over the last decade, in numerous countries and contexts, peace mediation has become an ever more important response to political crises. Preventing and de-escalating crisis and giving new, constructive dynamics to conflict processes through mediation poses distinct opportunities and challenges to third party actors as well as their institutions.
Peace mediation can be conducted by specialized mediation experts, diplomats with support teams and various non-governmental actors with a wide range of functions and roles involved.
As with many other states and international and regional organizations, Germany explicitly regards mediation as an integral part of its conflict prevention capacities and as an effective instrument for re-establishing and consolidating peace.
Peace mediation and crisis diplomacy are full of inherent dilemmas, particularly in periods of societal transition: For instance, should mediators work with or within autocratic systems, even if this might (first) stabilize these systems? Should mediators engage with “terrorists” who have the power to stop the violence, even if this indirectly endorses their violent tactics? Should they let radical religious leaders agree to peace at the cost of hard-earned gender equality?
This year's program will focus on dealing constructively with such dilemmatic questions where – even with the best of intentions – all available options to move towards peace seem to risk doing harm. The seminar participants tried to find answers to these and many other questions, who over the course of the week received a practical understanding of the various methods, models and concepts of peaceful mediation, with a special emphasis on managing inherent dilemmas in this area.
Speakers at the Seminar were:
Professor, Dr. Lars Kirshhof is the Academic Director of the Institute for Conflict Management and Co-Director of the Center for Peace Mediation at the European University Viadrina. For more than 15 years, Prof. Kirchhoff has taught mediation at institutions like Bucerius Law School, the German Federal Foreign Office, the EU and the OSCE and a wide spectrum of commercial and political organizations, foundations and think tanks. He coaches high-level-diplomats and special representatives with regard to their mediation skills and approaches, advises on specific crisis regions and serves as facilitator in conflict.
Dr. Anne Isabelle Kraus, conflict researcher, mediator, supervisor and coach, is Co-Director of the Center for Peace Mediation at European University Viadrina. As head of a research cluster with ETH Zurich, Swisspeace and National University of Kiev-Mohyla Academy, her research and coaching work specializes in managing difficult decisions and dilemmas in peacemaking. She provides conceptual support, practical training and consultancy on mediation and supervision/coaching to the Federal Foreign Office, peacemaking organizations and academic institutions.
Mathias Siegfried is Mediation Advisor at the Swiss Federal Department of Foreign Affairs. Prior to that he was head of the Swisspeace mediation programme and a faculty member of the Geneva Center for Security Policy (GCSP). From 2005 - 2009 he led the “Mediation Support Project” at Swisspeace to build up the EDA’s  (Swiss Federal Department of Foreign Affairs) mediation capacities.  He then proceeded to work for the United Nations Mediation Support Unit (MSU) as political affairs officer from 2009 - 2010, headed MSU’s Asia Team and was in charge of the development and implementation of mediation support activities in the region.
Since 2001, Janine Nuiken has been serving as the vice president of the European University Viadrina Frankfurt (Oder), being responsible for the development of the university, equal opportunity programs and the Collegium Polonicum.  She is also the Head of Strategic Development Center at the university. She holds an MA in Political Science and History and is a trained mediator. For many years and in various contexts, she has served as a facilitator of political discussions and organizational development.
Monya Ben Larbi holds a BA in International Relations and Diplomacy as well as an MA in Human Resource Management. She launched her first European mediation project at the age of 26 and since then has founded and led a wide variety of societal change projects.