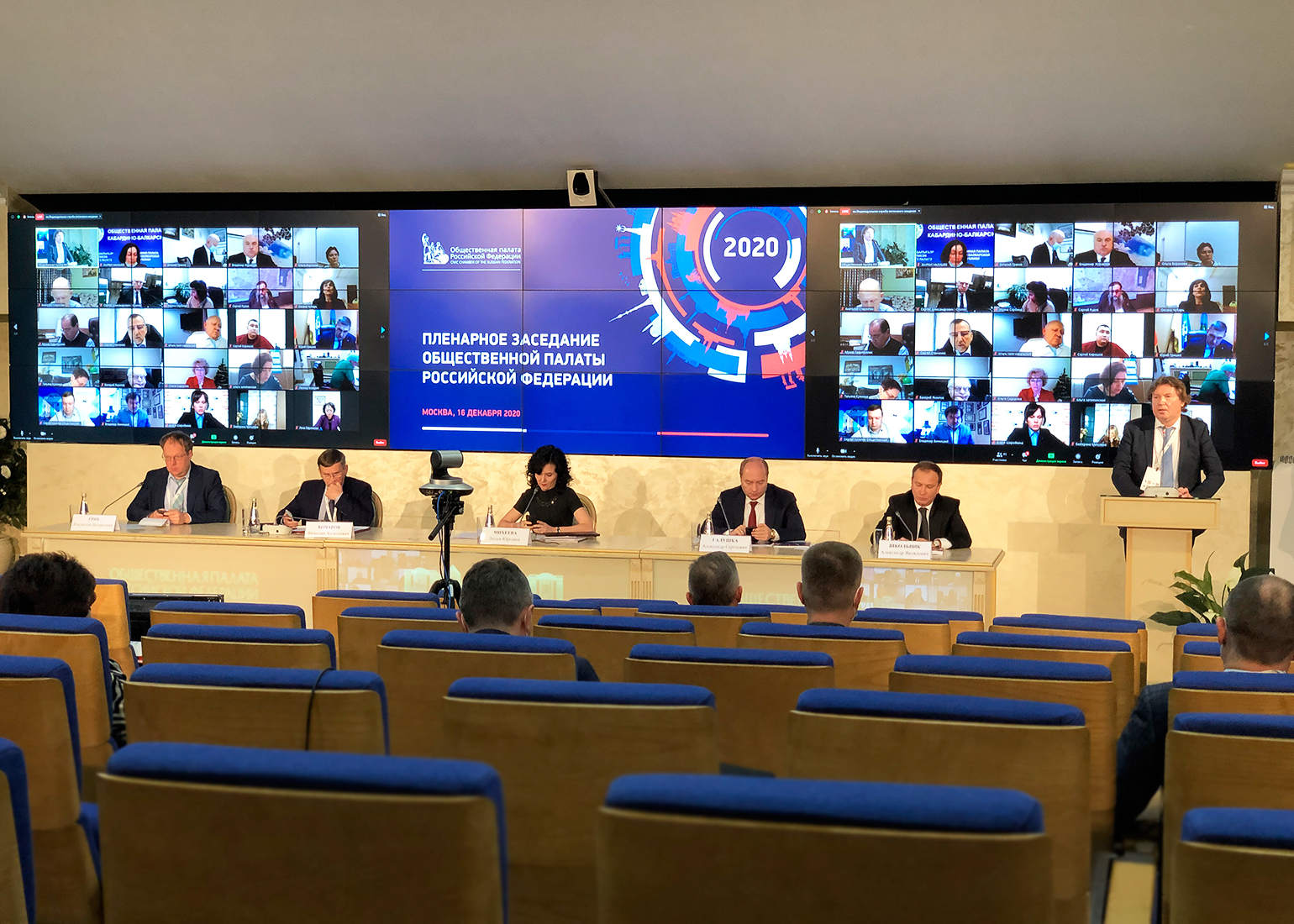 On 16 December 2020 a final plenary session was held at the Civic Chamber of the Russian Federation to discuss the draft Report on the State of Civil Society in Russia.
The main theme of the Report in 2020 is thinking on the transformation of public-state dialogue, the development of which was stimulated by the challenges of this year. The report reflects the main trends of the last year which influenced the growth of civic participation and consciousness of the Russians. These include the legislative implementation of constitutional amendments, work on adjusting national projects, independent public observation of elections, and ensuring Russia's information sovereignty.
Opening the plenary session, the Secretary of the Civic Chamber of the Russian Federation, Lidia Mikheeva, emphasized that the outgoing year has become special due to the sanitary and epidemiological restrictions caused by the pandemic and the need to use remote forms of work.
Sergei Novikov, Chief of the Presidential Directorate for Social Projects, noted the enormous contribution of the Chamber members to the voting on amendments to the RF Constitution. He also recalled that Russian President Vladimir Putin has awarded many public figures with state awards "For Benevolence" for helping during the coronavirus pandemic.
Ella Pamfilova, Chairperson of the Central Election Commission of the Russian Federation, noted the importance of the work of the Civic Chamber in organizing public observation of the elections, recalling that about half a million public observers worked at the all-Russian vote on amendments to the Constitution.
Tatyana Moskalkova, High Commissioner for Human Rights in the Russian Federation, stated that the discussion of the Report of the Civic Chamber of Russia on the state of civil society is a special event.“We determine the trends and patterns of development today, and, like a tuning fork, we determine the vector of development for the future. Today the Civic Chamber is the body that takes the temperature of society, determines the degree of democracy and trust in the authorities. It is very important that the Civic Chamber identifies and shows the request that requires a response from the highest legislative and executive bodies. Only in the dialogue between the institutions of civil society and the authorities can we build a civilizational space. The kind we deserve,” she said.
Maxim Grigoriev, Chairman of the Coordinating Council for Public Control of Voting, stressed that public control over elections has not only become the most ambitious project of the entire system of public chambers, but has also emerged as one of the largest institutions of Russian civil society.
“On the world stage, this is the most serious institution of public control over voting. The level of citizens' perception of both the elections themselves and the electoral system as a whole depends on its existence,” declared Mr. Grigoriev. He recalled that the coordinating council launched a sweeping training program for observers. “We are starting to prepare teachers who will train observers. We set the task for each civic chamber to form a core audience who can train observers. We plan to train more than 100 thousand people on a network basis, the level is very high, we will have to work hard,” he said.